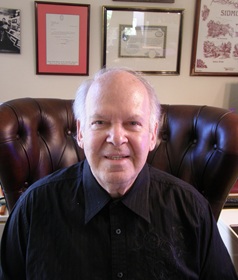 Stephen M. Cole received his B.S.B.A. degree in Marketing and Advertising from Chicago’s Roosevelt University. He was President of Roosevelt University’s Chapter of The Alpha Delta Sigma Honorary Fraternity and is a member in good standing with the American Advertising Federation. He spent three years in the U.S Army, first with a Secret Clearance on a Nuclear Missile Base and then as a Public Information Specialist and Foreign Press Correspondent in Stuttgart, Germany.

Today, Mr. Cole is recognized as an advertising/marketing expert, with nearly four decades of a proven track record. His earliest marketing efforts span back to the mid-1960s’, coordinating a fund raising activity for Chicago’s world famous Auditorium Theater. In the early 1970’s Mr. Cole joined the international sales team of a high profile global mutual fund and was ranked the #1 sales associate for the entire continent of Africa and the 9th top global sales producer out of the total of 16,000 international sales associates.

By the mid 1970’s he founded ASTRALVISION, a high technology marketing company, which was one of the original few pioneering companies responsible for the marketing of computer animation technology to the motion picture industry in Hollywood, California. This was evidenced by ASTRALVISION representing the production company that produced the first computer animated segment in motion picture history in the feature length motion picture, Disney’s TRON. ASTRALVISION was also the recipient of Hollywood, California’s Film Advisory Board’s “Award of Excellence” and The Academy of Science Fiction and Fantasy and Horror Films “Golden Scroll Award”, for the advancement of computer animation and laser processes to the Motion Picture Industry. Additionally ASTRALVISION was awarded Second Place in the Special Invitation Category from the Southern California Chapter of Resources Council, Inc., Pacifica Awards. During the late 1970s’ and concurrently with operating ASTRALVISION, Mr. Cole founded ASTRALVISION 3-D, one of the founding pioneers of marketing an updated version of 3-D glasses primarily for 3-D television broadcasts.

For the past two decades, Mr. Cole has focused his marketing / promotion skills towards the securities industry. He has orchestrated and overseen the financial packaging of a multitude of private placements and public offerings. Mr. Cole's expertise includes deal structure, coordination and interface with securities counsel and CPAs, initiation and complete production of all collateral sales materials along with the establishment of significant NASD broker / dealer retail support. Mr. Cole has represented numerous security Issuers and wholesaling their transactions to member firms of Financial Industry Regulatory Authority (FINRA) formerly known as the National Association of Securities Dealers (NASD) member firms. He has been a NASD licensed Registered Representative and a member of both the National Association of Financial Wholesalers (NAFW), and the International Association of Financial Planners (IAFP).

In the late 1990s’ Mr. Cole encapsulated his securities and marketing expertise, founded and is Chairman of The Wall Street Organization, Inc. (WSO) a private investment banking firm. WSO is an Associate Member of the National Investment Bankers Association (NIBA), a Member of the San Diego Investment Conference (SDIC), and a Member of the Southern California Investment Association (SCIA). Additionally the Company is an Accredited Business with an A+ rating from the Better Business Bureau. Contributing to Mr. Cole's rich experience and market exposure is the additional prestige he has recently achieved through being listed in the 2010 edition of Marquis Who’s Who in America.

The Wall Street Organization, Inc.® is not, nor does it purport to be a member of the Financial Industry Regulatory Authority (FINRA) .